A home or commercial property can be one of your biggest investments. Get the most value out of your property by making it look as good as new.

CALL NOW FOR AN ESTIMATE

No commercial or residential
pressure washing job is too big
for Bee Klean.
CALL NOW FOR AN ESTIMATE

Why is important to keep my house exterior clean?

Keeping your house exterior clean is an essential part of maintaining a safe and healthy home. Not only does it give your home a more attractive look, but it also helps protect it from the elements. For example, dirt and grime can obscure breaks in roof or siding that could cause significant damage if left unattended. Clean gutters are especially important to draw away rainwater from basements, foundations and crawl spaces and preventing water seepage into other parts of the house.

When you keep your house’s exterior clean by using the right cleaning products such as pressure washers and soft-scrub brushes, you’ll be protecting against mildew growth which can not only ruin paint jobs but also eat away at wood exteriors on porches or decks If left unchecked for too long this type of problem can easily turn into larger issues like dry rot or even structural damage over time.

Additionally, having a well-maintained facade increases curb appeal when potential buyers come around looking to purchase a home in the future and they will often expect nothing less than perfect condition before doling out their money for said property. Curb appeal has been linked to higher selling prices; so with all these benefits combined there really isn’t any excuse for neglecting your home’s exterior care!

How often should a roof be cleaned?

The frequency with which you clean the roof of your home depends on a number of factors. The material used to construct the roof, the area in which you live, and the condition it is in are all key considerations when determining how often cleaning should be done.

In general, asphalt shingle roofs need to be inspected and cleaned annually or every other year as part of routine maintenance. During these inspections, moss and lichen should be removed before they can cause damage to the underlying material due to their root systems that latch onto shingles. As part of this process, any debris such as sticks and leaves should also be cleared away so that rainwater can flow off easily without ponding on top of the roof surface causing further damage. You may also want to hose down any mildewed spots or use a detergent solution for areas particularly prone to built up dirt and stains over time such as around chimneys or vent stacks on roofs.

Metal roofs may require less frequent cleaning than asphalt shingles since there are no organic materials like moss that cling more aggressively but it’s still important not too let them become dull and covered in grime from bird droppings, acid rain fall out dirt particles from passing storms etc after extended periods between cleanings. Similar steps can also be taken here including careful pressure washing (or scrubbing) with mild detergents if needed for tougher build-ups over time which will help preserve its longevity against corrosion due to trapped moisture caused by standing water sitting atop an uncleaned metal surface over long periods without proper drainage off points near valleys or eaves where gutters attach at ground level beneath it when present at all.

Lastly, tile roofs require special care because they’re constructed using either clay or concrete tiles which tend toward higher absorptive qualities compared with many other types so once again annual inspection at minimum is recommended here too being sure specifically check underneath flashings (vent caps/ pipes etc). If pipe seals fail then moisture has found its way into vulnerable areas usually leading quickly damaging results unless caught early; cracks /crevices left behind by easily broken tiles could let additional growths like algae take hold making removal difficult but not impossible during regular cleans if caught soon enough – prevention being far better than costly cure whenever possible!

This information was provided by our good friends at Smooth Flo Soft Wash in Cincinnati! 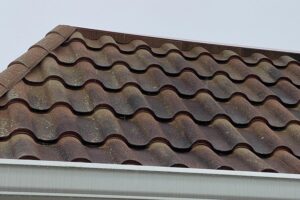 “Bee Klean is very professional. They have impressive equipment and are fast and efficient. They have great phone contact. Their prices are fair and competitive. Loy is a friendly man and knowledgeable about his business. I would definitely use this service again.”
“I would highly recommend them. I was contacted the same day of my inquiry. The project was completed the same day. I no longer have to worry about climbing a ladder to clean my gutters. I received fast, professional, courteous service. Bee Klean is a blessing.”
“Bee Klean did an outstanding job! Loy transformed the way the place looked, got all the stains and everything removed! I was very pleased with the work!”
Call Now for an Estimate